Posted on December 7, 2009 by Chris Sprucefield

We have all over the last decade been told that CO2 is the main culprit for the “Anthropogenic Global Warming” (AGW) – later dubbed “Climate Change” (CC), but is this really true?

The public story is that unless we reduce our emissions of CO2, the world will drown in rising seas, the arctic caps will melt, species go extinct and we will slowly cook to death.

While writing this, let’s keep it to layman terms that can be easily understood, potentially sacrificing a tiny bit of accuracy for ease of understanding and clarity of the message for all the non-scientists among us, and while I will be happy to answer relevant questions, I would ask that those that intend to, or wants to end up in endless and possibly pointless but time-wasting discussions about nitty-gritty irrelevant details, don’t.

While we can keep talking big and absolute numbers like giga-tons of carbon, this doesn’t help understanding, so let’s keep to smaller and more understandable units like percentages, and where appropriate for comparison, ppm’s (parts per millions), and even if there will be small rounding errors introduced, they will still be for practical purposes correct when related to each other.

The true facts are:

Yes, CO2 IS a greenhouse gas, and Yes, it DOES reflect some of the infrared radiation, stopping it from being irradiated into space, but this is not the whole story, and it certainly will not get twice as bad if we double the CO2 in the atmosphere, as the UN IPCC, the climate scientists and the climate alarmists claim.

CO2 is often referred to as “the gas of life”, and we all get taught in school that CO2 is used and depended upon by the plants for their photosynthesis, so could this really be so bad?

The AGW proponents repeatedly claims that if we double the amount of CO2, we will see as much as 6 degrees increase in temeparture on earth, and therefore, we need to stop our emissions and possibly even remove existing CO2 in the atmosphere, before it is too late.

On the other hand, the hard science on this subject, shows something completely different, science that has been around for decades and that are equally well-proven as old, science that is conveniently ignored by IPCC and the climate scientists, as accepting these well-proven facts would instantly kill their claims about the CO2’s rampant effects stone dead.

Even if you doubled the amount of CO2 from todays level, to the projected 800-1000ppm in the catastrophy scenario of IPCC,  the combined effect of the additional 400-600ppm CO2 in the atmosphere would amount to no more than approximately 1% of the total effect from the current CO2.

1% additional effect from increasing the amount of CO2 five (5) times in the atmosphere.

See for yourselves in the chart below, how increase of CO2 relates to global warming. 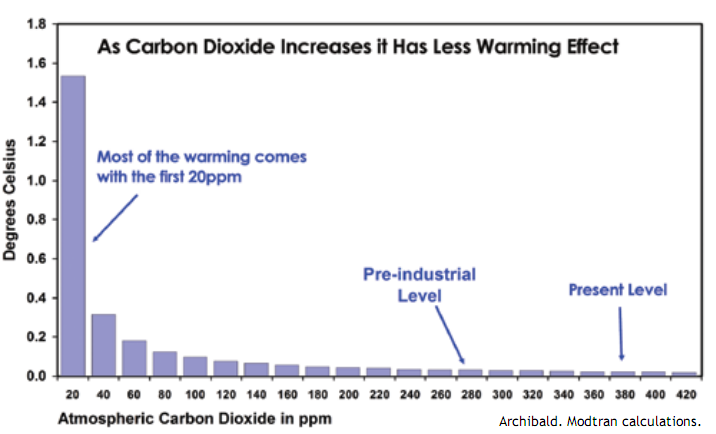 Ask yourself, does this sound like anything that you have been told?

But CO2 stays in the atmosphere for very long periods!

No.
This is a false statement, as some scientists claim that the CO2 will stay in the air for up to 200 years or even more, and therefore affect future AGW , but taken the recent research that shows that a balance between the oceans/vegetation and the air is achieved in as little as bout 5 years from increasing the level in the air, the long-term effects is greatly reduced, where the ocean acts as a sink for the CO2.
This means that the oceans/vegetation, as they always has, is acting as natural CO2 sinks, and this is the factor that accounts for the “unexplained” missing amount of CO2 in the atmosphere.

Contrary to the claims, CO2 is very easily solved in water, and it doesn’t take long for water to absorb CO2.
After all, this is how they make fizzy drinks – by injecting CO2 into water, where it is very quickly absorbed.

Add to this, that plants thrive on increased CO2, resulting in increased growth and thereby increased uptake of atmosphereic CO2.

Also, this explains why there is a natural increase or reduction of CO2 in the atmosphere over time, as cold oceans holds CO2 far easier than a warm ocean does, and as the oceans has changed in temperature there has been periods with more or less CO2.
This largely explains the pre-industrial changes in atmospheric CO2 levels.

Think of a cold vs warm soda bottle.
If it’s warm, it goes flat, if it’s cold, it stays fizzy.

So, how long does the CO2 stay in the atmosphere?

A: The average molecule of CO2 spends about four years in the atmosphere before it gets sucked up by a plant or dissolves into the surface layer of the ocean.

But man-made CO2 is far bigger than any other source?

Some numbers – in “units” for simple comparison;

The pre-industrial amount of atmospheric CO2 was 288 units.
After that, the natural additions are 69 units, and the man-made are 12 units.

The scientists certainly wants to make us believe that we add more CO2 to the atmosphere and the total amount of greenhouse gases than we actually do, and they apply a simple trick to do this.

In their calculations of how bad we are, they simply omit the single biggest greenhouse gas around, that we have no control over, in any way, shape or form, even if we actually do produce some of it.

Water vapor stands for 95% of the effects of greenhouse gases.

If we don’t take water into account, we end up with man-made effects on the GHG of 5.5%, or if we do, and don’t ignore those pesky clouds in the sky, or the moist in the air, the man-made part of the GHG is about 0.28%

So, if we agree to cut the CO2 emissions in half, globally, everyone pitching in, along the lines of what many AGW proponents demands, we will drop the net man-made greenhouse effect contribution from 0.1% to 0.05%.

I agree that these measures would make sense if our contribution was in the range of 5% or more of the total greenhouse gas effect, but since the net effect is less than the effect of natural month-to-month variation of atmospheric water vapor, I fail to see how this could possibly achieve anything in practical terms, as the effects of human contributions are in reality entirely masked in the noise of natural variations.

Logical question for you:
When it comes to climate simulations, which by mathematicians are considered meaningless as the climate scientists are trying to simulate chaotic systems which can’t be simulated, do you really think that you would stand even a chance of getting it right, if you begin with omitting the single biggest affecting component – water vapor – from the model?

So, worst-case scenario of the added CO2 then?

If we were to cut the emissions in line with the kyoto protocol, reducing our emissions by 30%, we would reduce the effect from 3.65% down to about 3.64% of the total effects of GHG.

On the other hand, we would see a heavily increased plant growth thanks to the increased amount of CO2, as this is pure food for plants, and this would not only act as a carbon sink, but also provide for substantial increase in food production.
Greenhouse farmers are known to inject up to 2000 ppm (about 5.5 times current atmospheric levels) of CO2 into their greenhouses in order to boost production.

CO2 is not the climate supervillain it is portrayed as, but absolute essential for all life on earth.

Would it hurt to change course?

No, of course not, but let’s be practical about this, and not sacrifice peoples well-being for the sake of a climate scare that lacks scientific base and stands on very shaky ground.

Sure, we could (and we should) aim for a less carbon-intense lifestyle where possible, not for the sake of CO2 emissions, but all the side-effects that comes from burning carbon, such as emissions of soot, heavy metals and general pollution, but this is an entirely different question from the one discussed, and one that has been heavily overshadowed by the side-track of AGW that has gotten if not all, so for all intents and purposes almost all attention as well as research money for the last decade.

Did you for example know that 16 (!) very large cargo vessels burning bunker oil emits more sulphur than all the worlds cars and lorries  combined every year? Want to read more? See [Daily Mail] or How 16 ships create as much pollution as all the cars in the world.

I believe that there are far more pressing issues to deal with, than reducing CO2, taken the extremely small impact that any additional CO2 can possibly have, and I believe that we may actually benefit to some extent from a slight increase in CO2 levels, due to the boosting effect it has on plant life.